​      Overview
When someone is new to a town or city, they may find it difficult to meet people and establish friendships right away, especially if they are an introvert or have a social anxiety. While events may be abundant, but that doesn’t mean potential guests always find the motivation to attend.

The goal of Go Gathering is to help people experience events and meet new friends. In addition, the app should create a social user experience that helps users get out and go to activities in person. Specifically, Go Gathering addresses those with fears and social anxieties. Currently, only 20% of those who respond to events actually attend them. Part of the problem could be that user attention is limited, and the app currently does not have a notification or calendar feature to remind guests about the event.

The tool/update has four clear goals. To:


While there are other event tools on the market today, none are created specifically for those with social anxieties and with the goal to initiate friendships.

​
Why Go Gathering and Why these

​      Updates? ​
Go Gathering, with these updates, will be a safe place for users to scope out events and make connections before they even arrive at the event. The tool helps push users with similar interests to the top of the event list and allows them to chat with one another if interested. Go Gathering is slightly different from other event tools because it’s a place where users can search for events but also search for friends to connect with ahead of time, reducing the stigma of attending an event alone.

Since this tool is ideally used for those new to an area, the updates also make things easy and organized. Push notifications, general app notifications, and the ability to upload an event to the user’s calendar, will help them stay organized in their busy “new life”.
​

​
Who’s Responsible?
From start to finish, I researched and designed the updates to this tool. I was presented with a scenario that included company context, business goals, product manager information, industry examples, target users, and the company’s brand information. Using that information, I developed a project plan, conducted a variety of research, created a logo and a modified style guide, and conducted user testing for low then high-fidelity versions.

I studied three industry leaders; a social media site, an event specific site, and a dating app. All three had features that I thought would be helpful to consider for the update to Go Gathering. When studying these leaders, I made note of my likes, dislikes, and action items.

Abbreviated findings: Very overwhelming in design and information, but it had great notifications and ways to link a person to their friends.

Abbreviated findings: This site is great for setting up a profile likes and dislikes since the sections are robust, but it’s more about finding a companion to an event than an event itself.

Abbreviated findings: It gives suggestion based on profile. The design is very clean and it’s a very easy tool to use. Photos and information provide details to create a sense of knowing someone.

Step Two: Create a Company Name & Visual/UI Style
​
The company brand was provided; they want to portray a caring, familiar, humorous, and optimistic identity. Between that and that the main goal of helping people, specifically by gaining friendships, I started by using an orange color to represent fun and activity, then inserted a group image to represent the gathering style of events.
Step Three: Create a Project Plan

I developed a six-step project plan. In this plan, I began with the discovery phase where I researched competitive products and synthesized my research. In my second phase, design, I developed the design information architecture as well as the user flows. In the third phase, I developed wireframes and validated flows with potential users. In the fourth phase, I designed the tool in high fidelity. In the fifth and sixth phase I developed my final tool and created my final designs in Figma.

I created a research plan using the three forms of research: user interviews, industry leaders, and secondary research. I was able to gather information from the users that would be key users of the tool, products that mirrored the goals of GoGathering, and secondary research that supported the user behavior while interacting with this tool. I developed personas based on this research which helped me to develop an app that was user friendly, supported interaction before the event, and supported event reminders in order to decrease attrition.

Based on my research, I determined that people enjoy being a part of a group and that human nature is to be social. It doesn’t matter if that person is an introvert, extrovert, or if they are diagnosed with social anxiety. I also found that people need consistent reminders in order to be held accountable to events they’ve responded to. Finally, I determined that human connection will help aid in comfort, thus increasing likelihood of attendance to an event. If a person has “met” someone ahead of time, they’re more likely to attend, versus going alone.

There are two main user flows. One is navigating through accepting the event to the new feature of chatting with someone else who is also attending. I wanted to mirror what Facebook offered, which is the ability to see who was going to encourage others and/or to create accountability. The second flow is to set alerts. A problem noted by the product manager is that users may not be getting effective communication about the upcoming events (ex. Emails, reminders, etc.). With these two flows, the user can allow notifications, as well as download the event to their calendar.
Step Six: Low Fidelity Designs

Based on the User Flow, I initially created sketches. From those sketches, I built wireframes to prepare for user testing. I wanted to mirror the alerts and positive features of Facebook, while keeping it simple and easy to use like Hinge. 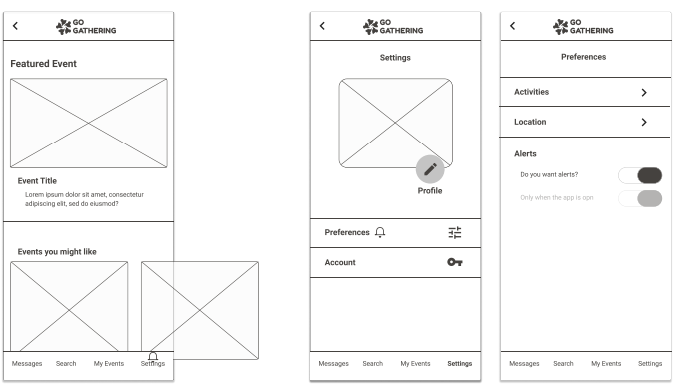 Within the user test, I wanted to see how each user would experience the app and determine whether my routes were user friendly and intuitive. Users identified icons and tools that weren’t descriptive enough, so I was able to make changes accordingly. In addition, the “open to chat” feature was new to each of my testers. In other words, they didn’t understand what the “raised hand” meant. After some iterating, I was able to create a chat button that helped clarify that feature. Finally, users identified an inconsistency within the tool’s messaging tool. It was unclear the difference between the “send a message” text and the “send” action button. I was able to make changes to this part of the tool in order to increase messaging clarity.

Based on information from my user testing, I modified the chat feature as well as the text and send feature. I developed high fidelity designs accordingly. I also incorporated the brand style to the overall design.

I conducted and moderated usability tests for five people: two in person and three virtually. I recruited subjects via personal outreach. I was hoping to discover the product’s ease of use and outline potential pitfalls in the overall user experience. I specifically wanted to observe the users' ability and understanding of the access notification settings, calendar download feature, event attendance, and messaging feature. The main adjustments I made were in these pathways in order to increase the 20% attendance rate. I hypothesized that the “open to chat” feature might not be clear to users.
My main findings were that I needed to incorporate the “interested” response to the “positive” responses. Therefore, those who had answered both “interested” and “going” would be able to chat with fellow attendees.
In addition, I changed the notifications for the app to a popup. Instead of navigating to this option, I instead created a popup that would help the user opt into notifications since push notification settings exist in the phone settings instead of the app itself.

Based on user testing, I created a more streamlined process that provided users that were “going” and “interested” to navigate to the chat feature. In addition, I added the popup that allowed users to accept notifications on the app furthering their likelihood of attendance at the designated events. 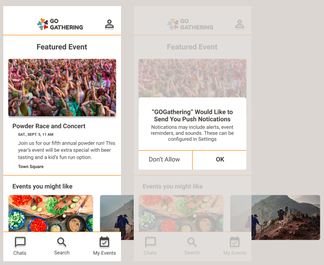 ​
Conclusion
Through usability testing, I updated three main things in order to increase participation in event beyond the standard 20% attendance at events.
Case Study | Prototype